The Glorious Sounds of the Many-Tongued Mimic

A major proposition of this music lover's blog is that witnessing music performed live, in person, is far superior to experiencing music in any other way.  But who has the time or means to go to the symphony or a club every day to satisfy their need for a live musical experience?
If one lives in Northern California, one could be fortunate enough to have an alternative in the spring.  That is, if a Northern Mockingbird, Mimus polyglottos, decides to take up residence in one's neighborhood.  Mimus polyglottos means "many-tongued mimic," a name given this bird because of its wonderful ability to mimic the sound of many other species of birds, as well as neighborhood cats, dogs, car alarms, rusty swinging gates, whatever. 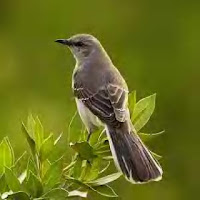 Now that word "mimic" has a rather disparaging connotation, doesn't it. As though they weren't creative enough to come up with their own sound, so they had to just copy the ones they heard around them.  To me this seems a little unfair.  After all, did the neighborhood Robin or Cardinal come up with their own sound?  I don't think so.  They copied it from dad, or it was already built into their dna.  Same for every other species.  But along comes the Northern Mockingbird and he starts to belt out the songs of all the other birds.  Hey, that's pretty amazing.
Elvis made a pretty good career out of singing songs that were all written by others, and now they call him "The King!"  So let's give the Northern Mockingbird some respect.  It's all about how one performs the sounds in live performance, right?  Well our Mr. King bird does pretty well on that score.  Each of the songs of these other birds is repeated by Mr. King several times, and then another song is taken up and repeated many times over, before going on to another.  One can listen to this performance for quite a long time and not hear him start over with a song he has done before. On top of that, he may spread his wings and flutter up in the air in a circle and come back to the branch he launched from, while continuing to sing, and not missing a single beat along the way.  Elvis wiggled his hips, but did you ever see him do that?  Not I, not even on the Ed Sullivan Show.
And here's the best part of all.  He often sings like this in the middle of the night, when all the other birds are sleeping or watching the late show, or whatever.  He doesn't take a break.  He's out there on the highest branch he can find, singing away at the top of his voice in the stillness of the night for hours on end.
But is it music?  You betcha!  Perhaps you read my article about the deaf percussionist, Evelyn Glennie, who said her aim in life "is to teach the world to listen. . . allow your body to open up, allow your body to be this resonating chamber. . . just experience the whole journey of that sound." The medium of music is sound.  The composer John Cage said, "There is no noise, only sound."  And musicologist Jean-Jacques Nattiez said, "the border between music and noise is always culturally defined.  By all accounts there is no single and intercultural universal concept defining what music might be, except that it is 'sound through time'."
For me the sound of the Northern Nightingale singing through the middle of the night is glorious sound through time.  For me that is music to my ears! And it has the other qualities that make the live performance of music special to witness.  You hear it in the moment the sound is created and then it is gone.  Take it in fully, "experience the whole journey of that sound," as it is there now, but perhaps not for long.  The particular sequence of sounds, the sequence of bird songs that are sung, the rhythm, tempo, dynamics, timbre and texture of those sounds are unique to that one performance, never to be repeated again.  That is what makes live performance so exciting.  It is not ordinary.  It is special, created in that moment, heard in the moment, and then it is no more.  So enjoy it while you can!

Did you notice him do his little dance of flight in the middle of his performance?  Now listen to the incredible variety of sounds in this next one.

And finally here's a chance to go to school and really learn about this amazing performer.  At 3:30 in the video, they even identify which species of bird song the mockingbird is singing as it goes along.  So if you are lucky enough to have a Northern Mockingbird take up residence in your own back yard, as I have this spring, that one creature will create the sound of an entire forest of different bird species, all by himself.

Often I like to take a walk around my neighborhood late at night, after most people have retired for the night. There is no traffic on the street, no people walking about, and one can be alone with one's thoughts and the stillness of the night.  The jumble of the day can fall away and one can more clearly see the way ahead.  Two nights ago I finished up a lovely hour long chat with my Facebook friend on the Northumberland Coast of Northern England. I had been thinking about capping off the evening with a walk, but as I got up from my desk I heard my many-tongued mimic wailing away in the back yard. So instead of the walk, I stepped out onto the porch and sat down and listened.  Mr. King was singing his heart out without a moment's pause, and his singing was the only sound to be heard in an otherwise totally silent night. I just sat there, in the same spot that was Marcia's absolute favorite place to sit, and I just took in the performance.  It was marvelous.  I know Marcia loved the green grass, the trellis and vines, the flowers and lush foliage of the yard, as well as the squirrels, hummingbirds, and cats that made it their home.  But I don't actually know whether she ever enjoyed a performance of a night time Mockingbird from that favorite spot.  I hope so.

Perhaps the glorious sounds of this bird has won itself some respect after all.  Of course one of the classic tales in American literature is the Pulitzer Prize winning novel by Harper Lee called To Kill a Mockingbird.  In the book, Miss Maudie explains that mockingbirds never harm other living creatures.  "They don't do one thing but sing their hearts out for us."  So to kill one would be to kill what is innocent and harmless, and Atticus warns that "it's a sin to kill a mockingbird."
Mockingbirds have not always lived only in the wild, as they were once popular as pets.  In fact Thomas Jefferson had such a pet, which he named Dick.  He didn't know about "The King" back then.  This aspect of the lives of mockingbirds was described in the traditional lullaby, "Hush Little Baby" which had lyrics that said:

Mama's gonna buy you a mockingbird.

And if that mockingbird don't sing,

In 1963 Inez and Charlie Foxx cashed in by recording their version of this song, simply called "Mockingbird," which became a big hit in both the US and the UK.  Since then the song has been covered by the great Dusty Springfield, as well as by Carly Simon & James Taylor, Toby & Krystal Keith, and Katie Melua.  It was also featured in episodes of the TV series "Will and Grace" and the film "Dumb and Dumber."
Of course now you want to hear this song.  And YouTube is waiting to serve up any one of them to you.  The Dusty Springfield performance at the 1965 New Musical Express Poll Winners concert is the best.  But in the spirit of our many-tongued mimic, I've decided that it's most appropriate to give you a version of pure mimicry, perhaps the best example of lip synching to be found on YouTube, the work of amy and kass.

That's all folks!
Posted by Ron Chester at 1:38 AM

who would have thought..a bird doing its little thing could draw so much attention..bravo!!