I was born in Galesburg, IL and my family lived in a rented house on Florence Avenue at that time.  Right behind our house was the backyard of a house on Brown Avenue, which was the next street over.  In those days in the Midwest, people talked to their neighbors and often became good friends with them.  That's what happened with my family and Art and Mary Stilson, who lived in that house behind us on Brown Avenue.  My Mom and Dad became close friends with the Stilsons while we lived there.  In 2007 I took a picture of that house, which is a lot fancier now than when the Stilsons lived there. 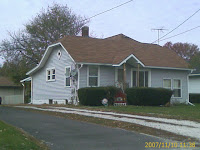 I don't remember anything from that period on Florence Avenue.  Before I started grade school we had moved to another house that my father had built for us across town.  My memory does go back to that house.  Even though we had moved across town, we stayed close friends with the Stilsons and would often go visit them in their small home.  And they had come to be known as Uncle Art and Aunt Mary to me and my brother, even though there was no true blood relationship there.
Uncle Art was a large man of modest means who lived happily with his wife, who was an excellent homemaker and interested in the arts.  She was an excellent cook, she did a lot of sewing, and she often sang in a local choir.  They had an upright piano, which she liked to play  Their backyard was filled with a very large garden, where they probably grew most of the food they ate.   I remember row after row of very large stalks of corn in that garden.  They didn't have any kids of their own, but they were always glad to see me and my brother arrive for a visit.  We always got Christmas cards and birthday cards from them, and probably some presents along the way as well.  Aunt Mary always had a cat.
Uncle Art had been laid off from his job, so they were getting by with limited resources.  But they had that garden and Aunt Mary always canned a lot of food for the winter months.  Occasionally there were serious talks with my parents about their situation, but usually they were just happy to see us and we'd have a lot of fun together.
Uncle Art did a lot of reading in newspapers, magazines and books.  I don't recall there being a television in their home in those days.  Uncle Art loved to find interesting stories, tidbits, and oddities in his readings.  He would clip them out and when we would come to visit, he would be sure to pull  something out from his scrapbook to show us.  "Oh, look what I found in the paper the other day," he'd say.  Then he'd watch while my Dad read it, perhaps aloud to us all, and then he'd laugh loudly with us all about the story.
He also had records that he'd pull out to play for us.  Early on they were probably 78's, but later he upgraded to regular LP's.  I remember him playing Spike Jones for us and howling with laughter over those hilarious tracks.  And one time he had a very special record to play for us, as he had discovered this amazing piano player called Victor Borge, who could really play the piano, but was really a comedian.  I clearly remember the day he played the Phonetic Punctuation routine for us.  We were all rolling on the floor with laughter on that one.
Uncle Art would have loved the Internet.  I'm sure he would have been all over the web, reading and saving interesting tidbits and oddities for his scrapbook.  And when I came across the following video, it made me think of Uncle Art immediately.  He would have loved this video of Carl Sandburg, in which he makes an accurate prediction about the outcome of the 1960 Presidential election.

You see Uncle Art was a big fan of Carl Sandburg, who was also born in Galesburg, only a long time before me.  He had written the definitive three volume biography of Abraham Lincoln, which was on Uncle Art's bookshelf and I'm sure he had read them.  Of course Lincoln was the most famous American our state of Illinois had ever produced and Sandburg was the biggest name to ever come out of Galesburg.  Uncle Art loved them both.

Many years later, after Uncle Art and Aunt Mary were gone, I discovered a link between this favorite son of my hometown, the favorite son of my home state and my favorite songwriter, Bob Dylan.  In fact, Dylan had once quoted Sandburg when he was performing one of his early songs, Talkin' World War III Blues.  When I first heard this song on the Freewheelin' album, Dylan was quoting Lincoln in the song.

And yet when he performed it in the Halloween Concert at Philharmonic Hall in NYC in 1964, he sang:

What's with that?  Why did he change the line?!  Which is right?

Of course with the connections to my hometown, I had to research the point and finally wrote up the answer to those questions on my Dylan bibliography website, Conclusions on the Wall.  The key to my solving this puzzle came when I discovered a two record set of Sandburg reading from his Lincoln works.  I had to buy the records because I remembered that Uncle Art had owned that album and had played it for us.  It was Halloween 1998 when I found it in the CD shop and took it home with me, exactly 34 years after Bob had sung the Sandburg line in New York City.
Once I figured it all out, I put together a page in my bibliography website all about it.  I think I enjoyed making that page more than any other on my website.  And to be sure, if Uncle Art had still been around, I would have proudly pointed him to it.  He would have loved it and would have surely added it to his scrapbook!

Take a look for yourself and see what you think!
Posted by Ron Chester at 11:48 PM